The Science That Runs Our Universe and the Story Behind It
Scott D. Bembenek | The Book

How do they govern the world we live in?

What was the difficult path to their discovery?

Who were the key players that struggled to shape our current understanding?

The Cosmic Machine takes you from the earliest scientific inquiries in human history on an exciting journey in search of the answers to these questions. In telling this fascinating story of science, the author Scott Bembenek masterfully guides you through the wonderment of how scientific discoveries (and the key players of those discoveries) shaped the world as we know it today.

With its unique blend of science, history, and biographies, The Cosmic Machine provides an easily accessible account without sacrificing the actual science itself. Not only will this book engage, enlighten, and entertain you, it will inspire your passion and curiosity for the world around us. 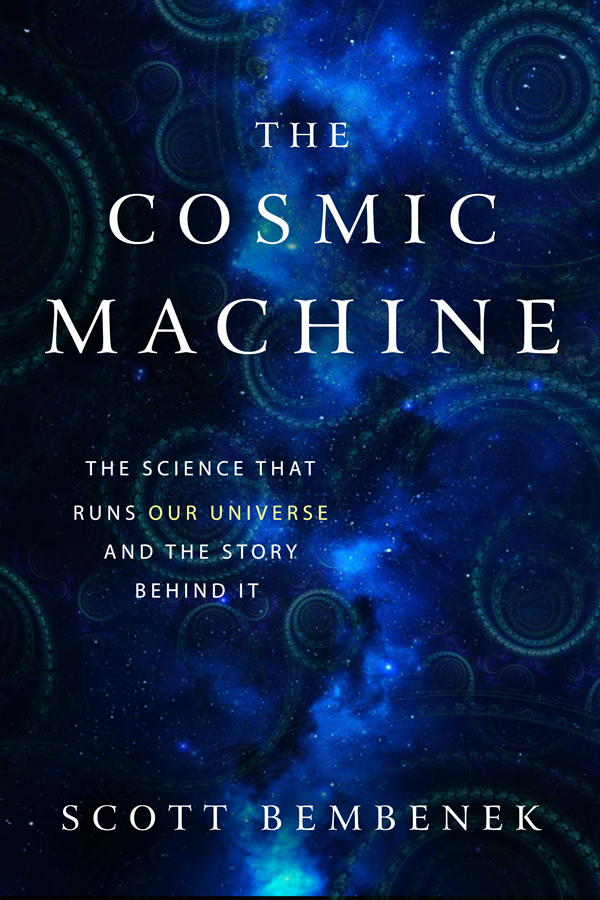 “… it's very useful to have a unified overview of what we know, collected and recounted in one place. The Cosmic Machine will introduce you to the basic principles by which today's physicists organize the world." –Sean Carroll, author of The Big Picture: On the Origins of Life, Meaning, and the Universe Itself

"A superb resource for science fans or those struggling to understand the subject; an impressive fit in an age of Bill Nye and Neil deGrasse Tyson web videos." –Kirkus Reviews

“The Cosmic Machine succeeds on all accounts.” –Midwest Book Review

“… kudos to Bembenek for taking an entirely mathematical concept and making it readable, comprehensible and interesting ….” –Lyle Sadavoy, Chem 13 News

"The Cosmic Machine is a wonderful way to introduce an intellectually curious person to how physics and chemistry have evolved and how they contribute to our understanding of the Universe." –Jim Stein, New Books Network

“[The Cosmic Machine was] enlightening.” –Gary Smailes, Founder and Editor at BubbleCow

“I just finished reading … your (nothing short of a) masterpiece. The Cosmic Machine very much accomplishes its mission: spark an interest in science via a captivating story as it relates to physics and chemistry. Although I'm already quite familiar with most of the topics described in this book, I was enthralled by the engaging presentation, style, and weave of the story.” – Patricia W., Goodreads Reviewer

“Overall I would definitely recommend this book to anyone who is interested in learning about how the universe works ….” –Matthew Pyhtila, Amazon Reviewer

"I love this book and the history lessons behind each of the four main topics." –Tanya E. Davis, Amazon Reviewer

“This book is extremely well-written, interesting and very difficult to put down. The author really knows how to turn a very difficult, [and usually] boring subject into interesting reading.” –acolby, Amazon Reviewer

“Dr. Bembenek has done an exceptional job of portraying the back and forth nature of scientific discovery, as different researchers confirm, expand, or try to refute​ the works of others in their field. Overall an enjoyable read ….” –Becky N., Amazon Reviewer

“While many physics books can be loaded with jargon and beyond the grasp of the non-physicist, The Cosmic Machine adeptly and deftly explains the methods behind the development of physics.” –Eric W., Amazon Reviewer

“Bembenek does a good job of staying within the bounds of appealing to avid science readers while keeping the concepts palatable for the newbie.” –Nick E., Amazon Reviewer

“This book was the first that actually did explain [the science] in a way that I understand, and I felt it really did open up a … significant world to me.” –Feroz K., Goodreads Reviewer

“For anyone who has a love for science and history, this book is a must read. Dr. Bembenek, however, does a phenomenal job of not only simplifying these complex topics but keeping the reader engaged at all times during this journey across time.” –Bita N., Amazon Reviewer

"I highly recommend this book ….” –Sergey B., Goodreads Reviewer

“The Cosmic Machine does a wonderful job of drawing the reader in ….” –Steve P., Goodreads Reviewer

“… a great read for both scientists and non-scientists.” –Frank A., Amazon Reviewer

The Cosmic Machine is not a textbook and therefore is not laid out as one. There are no problems to work at the end of a chapter, and no rigorous derivations of any sort are shown. I leave those to the excellent references provided in the bibliography. The book is written as a “science story”. That is to say, I use the history around the scientific discoveries and the biographies of the scientists to shape an interesting story, as I weave the actual science in throughout. This will allow you to become familiar with the “key players”, what they struggled with at the time (personally and scientifically), and the way we understand the phenomena today.

Overall, the book is divided generally into four major topics: Energy, Entropy, Atoms, and Quantum Mechanics. I chose these because I consider them some of the most (if not the most) important topics in physics and chemistry; if you understand these areas, you’ve got a good handle on a lot of science. They also happen to be some of the most interesting, in my humble opinion.

These four key topics are broad, and so I further divide them into chapters and sections to make the material very approachable. You don’t need to start with the first topic; you can start with any one you like. However, I would recommend completing one topic before moving onto another. The point is that each is written to be (mostly) self-contained while at the same time being well connected to the other topics being covered. In this way, you both learn in detail about a given topic, and then further your knowledge of each topic by understanding its connection to the others. For those of you that just have to know the “formal areas” in physics and chemistry touched upon in the book, they are: Classical Mechanics, Thermodynamics, Statistical Mechanics, Kinetic Theory, Quantum Mechanics, and many more.

You’ll notice that I include many footnotes throughout the book. As much as I do cover, I always find myself wanting to discuss some topics more. In these cases, I decided the extra discussion would be a better fit as a footnote rather than being in the main text. The footnotes not only give more information; they also provide more detail. In some cases, this material is more advanced, building off of the learnings from the main text; this will give something a bit extra for the real science enthusiast and experienced scientist alike.

OK, let’s talk about the elephant in the room (or the book rather). Although there are no derivations, I still show (albeit very sparingly) a few equations here and there, primarily appearing in the later chapters. To be honest, I struggled with putting any equations in at all. Indeed, Stephen Hawking was warned by an editor that for every equation he included in A Brief History of Time his readership would be halved; in the end, Hawking included only a single equation. To be perfectly honest, I wrote the text such that it stands on its own without the equations. So why did I put those damn equations in then? My motivation for doing so is to illustrate how mathematics and science complement each other, often providing the best overall explanation of physical phenomena. As Richard Feynman so eloquently puts it in The Character of Physical Law:

“If you want to learn about nature, to appreciate nature, it is necessary to understand the language [of mathematics] that she speaks in. She offers her information only in one form; we are not so unhumble as to demand that she change before we pay any attention.”

Nonetheless, I want you to feel free to skip over any – even all – of the equations (you’re not going to miss anything if you do) rather than being put off by their presence.

So, if you’re looking for an interesting story, with some history, biography and science, this is the book for you. Even if you’re not already science savvy you’ll be able to gain insight into several areas of the physics and chemistry. And if you’re already somewhat of a scientist, this book will help you find a new appreciation and perspective for topics already familiar to you, and you’ll probably learn a few things you didn’t already know (especially if you read the footnotes).

If nothing else it’s a good “science story” that most people will enjoy.